What Does It Mean?

'Metallica: Through the Never' opens in IMAX theaters on Friday, Sept. 27, and in 3D wide release on Friday, Oct. 4. 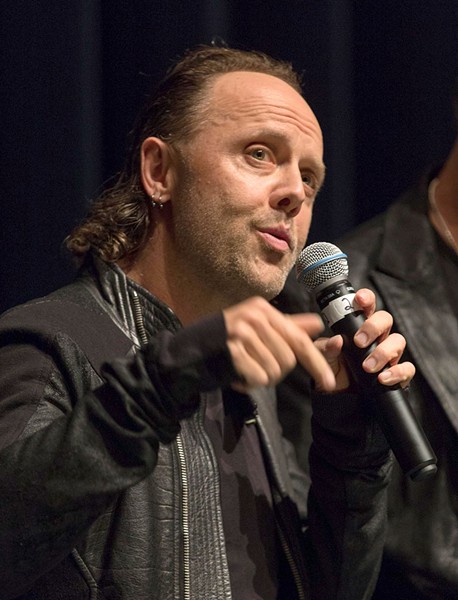 The climax of the new Metallica movie Metallica: Through the Never involves a boy vomiting, a fleet-footed CGI figure, a violent horseman in a gasmask, a man on fire, and the near-total destruction, via sledgehammer, of the band's stage set. Amid shooting sparks and mechanical groans of steel, James Hetfield approaches the mic.

"Should we keep playing?" he says. "That's what I wanna do. Let's get some amps up here, we don't need all this fancy stuff anyway, right?" After a spare backline is constructed, Hetfield adds, "This is what it's like in our garage."

Getting back to the garage is a running theme in the band's career, going back to the 1987 EP Garage Days Re-Revisited. But Metallica is the world's biggest metal band, and Through the Never is a big, overblown 3D experience. How can the members still appear like normal guys?

In an onstage Q&A after a screening last week at the Mill Valley Film Festival—the U.S. public premiere—the band answered that question in action. Lars Ulrich slouched low into his chair. James Hetfield joked about trying to get his car into the film. Kirk Hammett said that, while shooting, he was just concerned about getting blood on his boots.

Through the Never is a concert film with an extra plot added, but what that plot is, exactly, audience members at the screening tried to grasp: What is inside the bag? What does the main character represent? Answers fell into one of two categories: the "We thought it looked cool" explanation and the more maddening "It's whatever you want it to be, man" explanation. Asked why the film is named Through the Never—the title of one of Metallica's songs—Hetfield responded that "it's nice and vague. It can mean multiple things. How do you describe that? How do you describe what you just saw? I don't know."

Ulrich himself is a familiar face at the Mill Valley Film Festival, and the band's decision to premiere the movie here is a laudable nod to the festival's stature and their hometown roots. But amid all the joking on stage, Ulrich couldn't contain himself. "I'm just thinking about all the deep intellectual conversations about film that have happened on this stage over the years," he said, looking out over the Rafael Film Center, "and how that seems like a distant memory now."