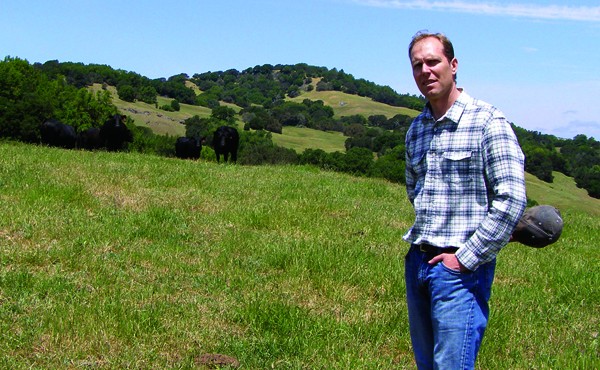 Time was that price and USDA grade A quality were all that average shoppers asked of their beef. Now, the meat counter is a crossroads of signs touting all-natural, sustainably raised and grass-fed beef, even at Santa Rosa's price-conscious G&G supermarket.

Here, one of the biggest signs belongs to the smallest slice of the shelf: wedged between unpopular cuts like veal, and the leading "natural" brand, this upstart grass-fed beef supplier may have only a small foothold in the market, but they aren't shy about it. "Good for the planet. Good for you. Good for the animal," Estancia Beef boldly proclaims.

Sounds good to the thoughtful consumer who was shocked by Eric Schlosser's Fast Food Nation, inspired by Michael Pollan's Omnivore's Dilemma and who would prefer to take the path of lesser harm. And the price isn't bad. Could there be a catch?

You can imagine the consternation or, what one observer in the industry jokingly terms, "adjective conflict." We're so familiar with the health and environmental benefits of sustainable and local agriculture, in other words, that we often conflate the two. Could grass-fed beef imported from half a world away have a lower carbon footprint than both conventional, corn-fed beef, and domestically produced grass-fed beef, as Estancia claims—or is there such a thing as greenwashing red meat?

To get a more personalized answer, we don't have to go far. Privately held Estancia Beef, founded in 2006, is a very local company, with offices in San Francisco. But we don't even have to cross the Golden Gate to meet cofounder Bill Reed. He also runs a cattle ranch just south of Petaluma, at the end of a rustic lane shaded with live oak and bay laurel.

In answer to the question begging, Reed throws open the doors to a big barn. There's not much to see now: a dusty John Deere and a few bales of hay. In a few weeks, the barn will be filled with hay trucked in from Oregon, Southern California, maybe even Arizona. For the next eight to nine months, the cattle here will have to feed on hay while the dry California summer degrades the pasture, still half-green in late May, into nutritionally useless husks.

This demonstration is the first basis for Estancia's environmental claims. Hay requires fuel and fossil-fuel-derived fertilizers to grow, harvest and transport. In South America, cattle live their whole lives on the lush pampas until their day of slaughter (in a facility that's one of the newest in the world, built to Temple Grandin standards).

"Argentina is to beef what Cuba is to cigars," says Reed, quoting Estancia cofounder J. P. Thieriot. On the pampas, raising great, grass-fed beef is hard to screw up. "You've got to have good grass to make it. If you're not getting good grass, you're getting lean, tough tissue. Here, it requires intense work to get it right."

Reed and Thieriot know a thing or two about the cattle business—and just as importantly, about business. Thieriot, who manages operations in Uruguay, is a San Francisco native with an Argentinean mother and spent time on Argentinean cattle ranches before going into the tech business. Reed, a lanky, fair-haired 45-year-old, grew up on a Virginia cattle ranch, but his résumé reads like highlights of progressive business in the 1990s. Out of college, he consulted for a Czech brewery after the Iron Curtain came down, worked his way from truck driver to director of operations at juice giant Odwalla and went on to become CEO of New Leaf Paper. When he speaks about Estancia, it's clear that he's covered these topics many times, but each time with deliberation and careful thought.

Here is a cattleman who, in a recent entry to the New York Times "Ethical Carnivore" essay contest, wrote, "If eating meat is to be an ethical activity, it must start with an understanding of the price at which our delight is purchased. . . . Does the delight justify the horror?"

So what about that other shoe to drop on Estancia's carbon footprint, the transportation costs? Reed says that while they cannot afford a third-party analysis at this stage, their internal research suggests that it's miniscule compared to a grain-fed operation. Based on Michael Pollan's calculations, the average grain-finished beef product uses four-tenths of a gallon of fuel per pound. Estancia's product, shipped in chilled containers by boat from Uruguay, nets .0015 gallons per pound.

With statements like "Estancia is beef the way nature intended it to be," Reed places himself in the sights of critics from all sides. "There are a few rabid locavores," Reed recalls, who complained, 'I can't believe you are doing this!'" Estancia's website features a proactive response, titled "Our Beef with Locavores."

More surprisingly, he's taken flak from the mainstream beef industry. "Early on, when I started the business, I got a call from one of the big feedlot producers. 'Who the fuck do you think you are,'" the cattleman bellowed, "'You and Michael Pollan and your San Francisco liberal friends.'" According to Reed, the cattleman was a big guy, and threatened to beat up Reed if he ever saw him.

To follow the scientific debate on pasture-raised vs. feedlot beef is a lot like following the stock market: one day it's up, another day, down. In 2006, the Union of Concerned Scientists came out on the side of pasture-raised beef; other studies (some with ties to agribusiness) have concluded that the longer lives that cattle live amid grass—no matter their better lives—emit more greenhouse gas emissions of methane than the truncated tenure of feedlot animals.

"What I've learned in my career with environmental companies is there's really no right answer," Reed philosophizes. "We're humans, we're taking things from the earth. Estancia is not perfect; we're in the middle. We're more progressive than what 99 percent of the industry is doing." Reed compares his business to the Prius. "The Prius isn't perfect, it uses gas, it gets 40 miles to the gallon," he says. "But it's a great addition to our culture. Oh, and by the way, it's imported."