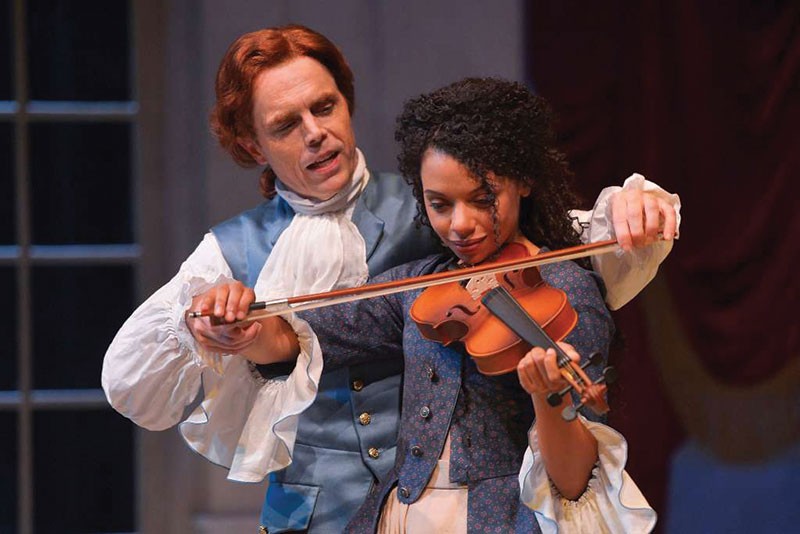 'I'll have to think about it."

I give away little in revealing the final line of Thomas Bradshaw's button-pushing world premiere Thomas and Sally. One could argue that the whole point of the play is summed up in those words, cautiously uttered by a contemporary college woman, Karen (Rosie Hallett), who's just been told a whopper of a story by Simone, her roommate (Ella Dershowitz).

Simone is a descendent of the illicit union between American founding father Thomas Jefferson (an excellent Mark Anderson Phillips) and his inherited slave Sally Hemings (Tara Pacheco, magnificent), and she sees Jefferson and Hemings' "relationship" as a kind of mind-blowing, against-all-odds love story.

Ellen is not so sure.

The tale begins years before the birth of Sally, one of several children born to Jefferson's father-in-law, John Wayles, and his slave Betty Hemings. It's that little-known fact—that Sally Hemings was the half-sister of Thomas Jefferson's wife—that first inspired Bradshaw to tackle the project, unearthing scores of other challenging historical details along the way.

Though relatively breezy and light in tone, Thomas and Sally is proving to be MTC's most polarizing play to date.

Expertly directed by MTC's artistic director Jasson Minadakis, the epic endeavor—lasting just over two-and-a-half hours—frequently dazzles, with marvelous work from its technical artists, skillful performances from a first-rate ensemble and a plot structure that is as cleverly designed as the sets and costumes - including the aforementioned college-dormitory framing device.

Taken along with Bradshaw's tendency to put contemporary words ("Wow!") into the mouths of 18th-century figures, the framing device is an effectively Brechtian ploy. The presence of Ellen and Simone—who freely discuss sex, race and history, debating elements of the story, while occasionally donning costumes to enter the action—constantly roots the play in the realm of questions and context, encouraging careful thought over quick emotional response. As a result, Bradshaw's bold foray into American history is often more intellectually gripping than it is emotionally engaging.

Then again, given the fiery and acrimonious emotions the play has inspired by those who've yet to see it, I suspect that's just the point.