Where Was It Filmed? 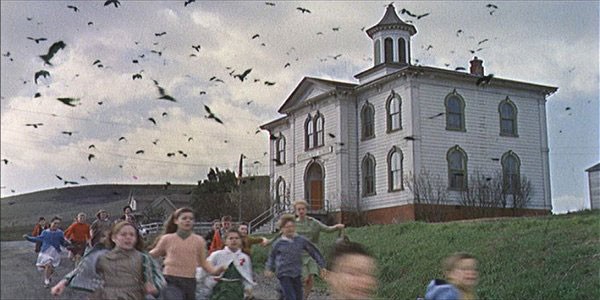 Here's a fun game for Santa Rosa residents: rent Alfred Hitchcock's 'The Birds' and each time they mention Santa Rosa, scream loud and wave your hands over your head like you're fighting off devil birds. It never fails to entertain. In 2012, it's difficult to retrace the exact traces of the film's shooting locations, since the town in the movie is actually a composite of Bodega, Bodega Bay and studio sets—but it's not impossible. One thing: don't go searching for the Tides Restaurant, featured so prominently throughout the film, since the original location of the restaurant burned down, just as it did in that great dramatic scene where the gas station blows up.

After The Birds was released in 1963, the Tides has been rebuilt twice; the original location was actually on the driveway leading up to the current restaurant, gift store and fish market. Fortunately, according to the book Footsteps in the Fog: Alfred Hitchcock's San Francisco, the wharf where Tippi Hedren first sets sail to deliver the lovebirds to Kathy Brenner still exists. Other landmarks to look for: the Casino restaurant on Bodega Highway, where cast and crew ate meals during filming, and where chef Mark Malicki cooks his gourmet, locally sourced meals today; and the Potter Schoolhouse, up near the St. Teresa de Avila church in the actual town of Bodega (though don't look for Annie Hayworth's cottage next to the schoolhouse, as that was a false front made for the film).

The schoolhouse is a private residence, but don't let that stop you from taking photos of yourself screaming in front of the grand, old white building on Bodega Lane. You also might want to recreate the scene where the schoolchildren run away from the schoolhouse as birds peck away at them, so head for Taylor Street Hill in Bodega Bay, and run and scream loud on your way down.

The Brenner Farm across the bay, where the final standoff with the birds occurs, was the home of Rose Gaffney, the woman behind the successful campaign to prevent PG&E from building a nuclear power plant on Bodega Head in the 1960s. Hitchcock transformed her broken-down ranch into the little farmhouse where Mitch Brenner lived with his mother and sister. To find it, drive down Westshore Road toward Bodega Head and look for a sign that says "Restricted Access-Bodega Marin Laboratory Housing" and a grove of cypress trees. Make sure to scream in terror when you get there.—Leilani Clark

'Cheaper by the Dozen'

The opening credits for 'Cheaper By the Dozen' (2003), a schmaltzy family flick that Steve Martin fans should stay as far away from as possible, features a montage that could only be true in Hollywood. The film begins with shots of Martin jogging through the green hills of Petaluma—it's supposed to be the middle west town of "Midland"—past sleepy cows and countryside, when suddenly he's running down a small-town block and waving to neighbors, then just as quickly he's back to the countryside, running up the porch of a farmhouse in the middle of nowhere.

Well, that small-town block is none other than Santa Rosa's Railroad Square. In the clip, you can see Chevy's in the background, and the buildings that currently house Furniture Depot, Old Town Furniture and Sacks Thrift Store. In a shot filmed through the window of Omelette Express, you can see the storefront across the street that's now home to Jack and Tony's Whiskey Bar and Cast Away Knit Shop.

Of course the farmhouse where Martin lives with his wife and 12 children isn't in the Midwest either. The big, white Victorian is actually located on Two Rock Ranch at 1051 Walker Road in Petaluma. It's a private home, owned by the Tresch family, and home to an organic dairy and an apple orchard.

Santa Rosa makes a reappearance at the end of the film when Martin and his son return to "Midland" by Amtrak. The station that they come home to is none other than the Railroad Square Train Depot—soon to be home to the SMART train. As the family hugs and makes nice, you can see the building where Flying Goat Coffee now resides, in the background, and a little bit of A' Roma Roasters when the camera angle changes. One word of recommendation: there's nothing wrong with watching the beginning and the end of this film and fast-forwarding straight through the middle. Your precious life span will thank you later.—Leilani Clark

Starring Bruce Willis, Billy Bob Thornton and Cate Blanchett, 'Bandits' is both the true story of a bank-robber love triangle gone wrong and a tour of the North Bay's funkiest hotels. First, there's Mill Valley's Fireside Inn, the white, freeway-side icon that's been converted into apartments since the film's 2001 release. After yet another successful heist, bandits Joe (Willis) and Terry (Thornton) and their all-too willing hostage (Blanchett) crash at the inn and gaze out over the marsh and freeway from its Colonial-style porch.

Then there's Santa Rosa's classic dive-mansion, the Flamingo Hotel. After an unlucky encounter with a Clover dairy truck (sporting the motto "Here's lickin' at you, kid"), Terry and Blanchett hide out at the hotel (2777 Fourth St., Santa Rosa) during a cosmetic convention. Forced to bunk together in a pink-and-white wallpapered room, the pair become intimate, sharing their secret fears (black-and-white movies, antique furniture), eating takeout and giving each other facials.

Finally, there's Nick's Cove (23240 Hwy. 1, Marshall). In Bandits, it looks like little more than a roadside biker bar, with a neon blue sign advertising "music and mollusks." The trio finally falls apart at this West Marin destination (which has undergone significant remodels since 2001). They order whiskey and warm milk, Terry hyperventilates and collapses on the dance floor and the men brawl, crash through a coastal window and fall to the ground outside. Heartbroken and declaring that the male duo together make up "the perfect man," Blanchett leaves her bank robbers, forcing them to head down the coast to the film's final setting in Southern California.—Rachel Dovey 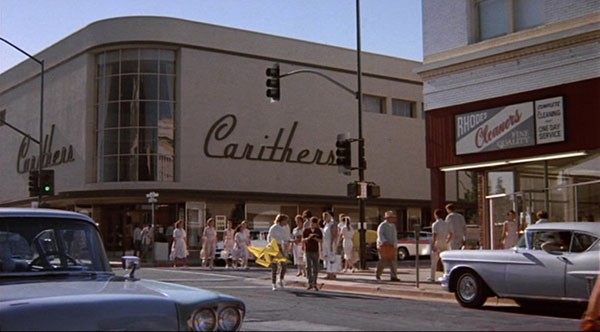 'Peggy Sue Got Married,' Francis Ford Coppola's 1986 film about a woman who travels back in time only to realize that she doesn't want to change a thing, is chock-full of Santa Rosa and Petaluma sightings. When Peggy Sue travels back to 1960, she wakes in the Santa Rosa High School gym. In the next scene, the front of the school on Mendocino Avenue is featured in all its retro-glory. Later, Peggy and her friends drive through the streets of downtown Petaluma. They cruise past the classic iron-front buildings on Western Avenue, between Petaluma Boulevard and Kentucky Street, and the historic Lan-Mart building at 10 Kentucky St., now home to restaurants, a hair salon and a spa.

A grand building adorned with a stylized Carithers sign is at 101 Kentucky—it's now a furniture store. Peggy's family lives in a lovely white Victorian on the edge of Petaluma, located at 226 Liberty St., used for both interior and exterior scenes. It's across the street from a house that was used in the filming of Mumford, and it recently was available for rent on Craigslist. Peggy visits her future husband Charlie (Nicolas Cage, weird as ever) at his home, located at 1006 D St., but don't look for it; it was torn down over 10 years ago.

One of the coolest buildings in the movie is "the Donut Hole Cafe," which was actually Millie's Chili Bar at 600 Petaluma Blvd. S. A brownie-gift shop for a bit, it currently sits empty. Later in the film, Peggy Sue and her beatnik boyfriend head to Lena's Restaurant in Santa Rosa. Lena's, once the oldest restaurant in Santa Rosa, was razed in the '90s; Chop's Teen Club was built in its place at 509 Adams St. in Railroad Square. If you look carefully, down the street you can see the neon sign for Michele's restaurant, now Stark's Steakhouse. Unlike Kathleen Turner and Nick Cage, that building has aged relatively well.—Leilani Clark

Is it legal to hunt ducks on the Petaluma River? If the duck in question is named Howard, it should be. Nine times out of 10, I have no idea what is going on in George Lucas' 1987 disasterpiece 'Howard the Duck.' But I do know the brown, lazy Petaluma River when I see it, and that police car taking a dive might have been the most sanitary thing to fall into it.

Should it prove too tempting to skip the foul-mouthed, raunchy, duck-from-another-world blockbuster, know that there are a few scenes shot in Petaluma. Western Avenue is featured, the aforementioned river and a glimpse of the Petaluma Bridge during Howard's scamper away from law enforcement (they should have just let him go) in a small-engine glider. That's it.

Maybe the short screen-time is why Petaluma officials and residents don't exactly boast about being in the movie. Or maybe it's Lea Thompson's line, "I just can't resist your intense animal magnetism," while she and Howard are snuggling up to watch late-night television.—Nicolas Grizzle