Beloved Clover cow returns to a billboard near moo 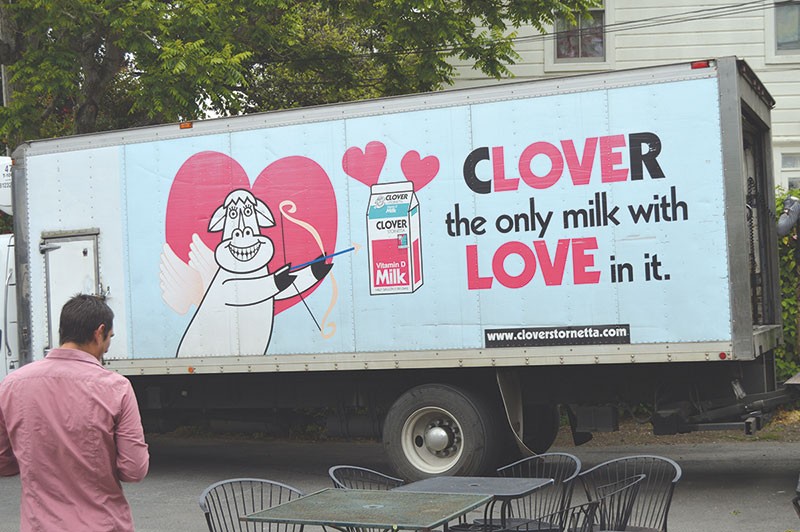 The billboard on Highway 101 headed north to Santa Rosa was a tip-off that something was afoot in the land of Clo, the beloved mascot of the Clover Sonoma dairy.

The large, roadside advertisement for the 101-year-old Petaluma company bragged of milk that was a silky-smooth experience that offered a great residual "mouthfeel."

What happened to the dopey puns from Clo herself, spotted on billboards and trucks around the Bay Area for decades? The Clover mascot has appeared as everything from a "Moomaid" to a painterly "Claude Moonet" to a "Dairy Godmother." Once, Clo even ventured to the "Supreme Quart" for a hearing.

The company embarked on a mission last year to go GMO-free and boost its national bona fides as an ecologically minded leader in the milk industry. As part of the company's new look, Clover rebranded itself, and is now known as Clover Sonoma instead of Clover Stornetta, leveraging the strength of "Sonoma" as a brand.

There were already two branches of the company, Clover Stornetta and Clover Organic, which merged as one. The company has now committed to stop using GMOs in all dairy-related processes for its conventional line of products. The organic line is already GMO-free.

Clover Sonoma began in Petaluma in 1916 as the Petaluma Cooperative Creamery, and soon began distribution across the North Bay. Clo the pun-dropping cow debuted in 1969.

The company wants to create a more positive image for the product, and marketing director Kristel Corson says the rebranding was influenced by Clover wanting to honor its long history in Sonoma County.

"The conventional line's packaging hadn't been updated since the 1980s, and the organics since the 2000s, so we wanted to tighten it up for the future," she says. "Sonoma has grown into a wonderful region with artisan foods and dairy, and we want to further be a part of that."

As of December, Clover Sonoma is a certified B Corporation, meaning it meets third-party standards of social and environmental performance, accountability and transparency. B Lab, the nonprofit group that runs the B Corp program, ranked Clover 97 out of 200 for its B Corp business practices, well above the 80 points needed to qualify.

Simon Thorneycroft, co-founder of Perspective Branding, a San Francisco food-branding agency, likes Clover's new look. Refining the previous packaging images, the company's rebranding efforts have been focused on creating a more polished and upscale look. While the organics line still has whimsical pastoral scenes in the background, and the conventional line is still in solid primary and secondary colors, something feels tighter in the new visuals.

"Packaging should tell you what you don't know about a company, but what they want you to know," Thorneycroft says. "The four-leaf clover didn't tell you what the brand stood for, and a company needs to stand for something to be successful. I think the new one symbolizes the outdoors and enjoying life; this one's a bit more evocative and has personality."

But Clo has always had plenty of personality!

The cheerful cow is an intrinsic part of the regional culture. It could be said that Clo was not just the company mascot, but an emblem of the North Bay itself. The ads elicited laughs or eye rolls—love her or hate her, it's hard for residents to be neutral toward the funny, charismatic cow.

Since the rebranding, she has been noticeably absent from highway billboards, replaced by "mouthfeel" language. Where's jaunty Clo, who stood out on the large boards with her wide-eyed smile?

The company pledged in February to keep Clo as its mascot, but as of May, the endearing cow remained missing from billboards. That's Cloutrageous!

Fortunately, the company's skill at making painful puns is still razor-sharp. "She's on Clo-cation," Corson says, and advises to keep an eye out for Clo this month. "She'll be coming back to a billboard near you."

And she has come back! On one recently spied billboard, she appears as a suit-wearing newscaster (Rachel Madcow?), and in another, as a superhero, both announcing that Clo's gone totally GMO-free.