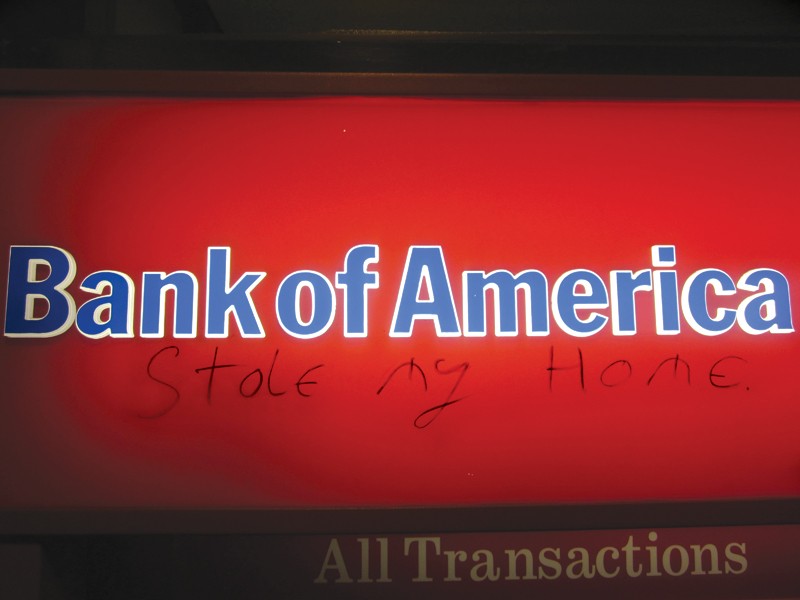 Outraged citizens are protesting that millions of dollars of Napa County treasury funds are in the hands of banks whose unethical business practices contributed to the 2008 financial meltdown: Bank of America and Wells Fargo. Wells Fargo is being sued by the U.S. government for fraudulent mortgage-issuing practices, and both banks are part of last week's $8.5 billion settlement with federal regulators for foreclosure violations.

Move Our Money is a citizens' group that, since January of last year, has been investigating county treasury practices and seeking policies for different management of public money. The group wants public funds to be held instead by institutions that are socially responsible.

Paul Moser, 63, is a Move Our Money member who lost much of his retirement in the 2008 meltdown. Moser says this is the first time in his life that he's participated in activism of any kind. "At my age, it's kind of difficult to make it all back," said Moser, who, after the banking failure, spent eight months picketing in front of Wells Fargo and Bank of America in Napa.

"People want Wells Fargo to be about the Old West stagecoach and for Bank of America to be the same institution that granted loans after the earthquake of 1906," said Moser. "But things are desperately different now. The financial sector is no longer a responsible partner in our society. It's the kind of shock that is way too disturbing for us to handle."

The pending federal lawsuit against Wells Fargo is an attempt by the U.S. government to gain compensation for money the bank wrongfully obtained as a result of "breach of fiduciary duty, gross negligence and . . . [mortgages] wrongfully certified." The Los Angeles Times on Dec. 10 reported another lawsuit by defrauded homeowners accusing "Wells Fargo & Co. of reneging on a sweeping mortgage-modification deal" established in a San Jose case in 2010.

According to Move Our Money co-organizer Gary Orton, the Wells Fargo checking funds were applied to an investment practice known as overnight sweep repo, in which checking deposits are used as overnight investments by Wells Fargo and returned the next morning with interest. After the group began investigating in January—including letters to and meetings with the treasurer, the Treasury Oversight Committee and the board of supervisors—the treasurer's office discontinued these investments with Wells Fargo.

"There is a depositary function and an investment function of the treasurer's office. When you do the overnight sweep repo, that's investment," says Orton. "The county stopped them. But they could turn around tomorrow and start them up again because there is no policy to stop them; they have no written internal control policy."

Frasier explains that the sweeps were stopped because the interest income was not sufficient, and that the funds were not at risk because they were over-collateralized. Frasier adds that the county has been working with Wells Fargo and Bank of America since 2003.

The county is now planning to put out a bid so that banks can be chosen according to policy. "We're going to put out an RFP [request for proposal], so any bank in the area can respond," says Frasier, who explains that it might be difficult for a small institution to put up the collateral required by state code and supply services required by the county.

Orton fears that when the banking services contract goes out to bid, Wells Fargo and Bank of America may underbid smaller institutions. "We shouldn't be rewarding the unethical banks," says Orton.