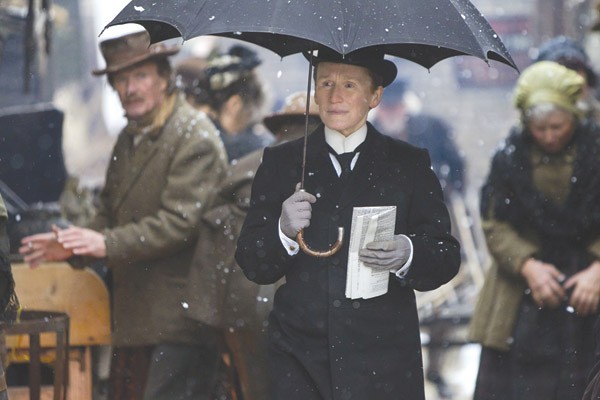 Based on a George Moore novella, Albert Nobbs has some plusses. It's plausible. It's a story of the kind of thing that used to happen all the time. It's a well-staged and beautifully costumed recreation of Dublin for Ulysses-philes to daydream over. Brendan Gleeson plays a richly bearded, hard-drinking physician, well able to bear the heavy lifting of the most tragic lines. And Albert Nobbs has Glenn Close and also Janet McTeer.

What Albert Nobbs doesn't have is a director who can harmonize its various acting styles. Rodrigo Garcia (of the post-Crash tag-teamer Nine Lives, which co-starred Close) helms with the same fits and starts of his connect-the-dots dramas.

Glenn Close is the frozen-in-fear title character, a waiter at a pretentious hotel. She hides her sex in male clothes, and also conceals a trove of hard-earned money in the floorboards of her dingy room.

Close's portrait of a bound-in woman is the kind of sad the viewer can admire rather than feel. Maybe wearing a derby tempts an actor to try earnestly to emulate the wistful Chaplin. But as moviegoers, we're trained to admire proactive indecent characters, so we keep wanting to see more of McTeer as Nobbs' acquaintance, a laborer, also a male impersonator, who has managed to successfully live as a man.

McTeer is a stage icon, but she previously hadn't made a movie where she didn't seem overpowering. Perhaps among the slackness of the direction, and among the occasional anachronism of the lines ("I don't want to be that person"), there was room for McTeer to take charge on the set. Her cropped hair and remarkable sturdiness is a treat to watch for anyone who likes strong women. McTeer's impulsiveness, and the spark of anger in her, transcends Albert Nobbs' slight smell of mold.