The picture seems to tell the story. A tule elk bull stands on the coastal prairie at Point Reyes National Seashore, head lowered, open-mouthed, his towering antlers tangled in a mess of barbed wire.

Some might say the wire is hurting the elk, but the photo was taken in October, during the rut, and he might just as well be bugling a lusty call to available females. Others see an elk that just wrecked a fence.

This bull's real problem is that he's tangled up in a controversy that has dairy and cattle ranchers, environmentalists and the National Park Service asking far-reaching questions about the future of the seashore.

David Press is familiar with "Barbed Wire Guy," as he calls him.

"Fortunately, if he can make it for another couple months," Press says cheerily, "he'll drop his antlers, and then—problem solved!" But if the situation worsens, says Press, the park's wildlife ecologist, they'd "dart him down," remove the wire and send him on his way. 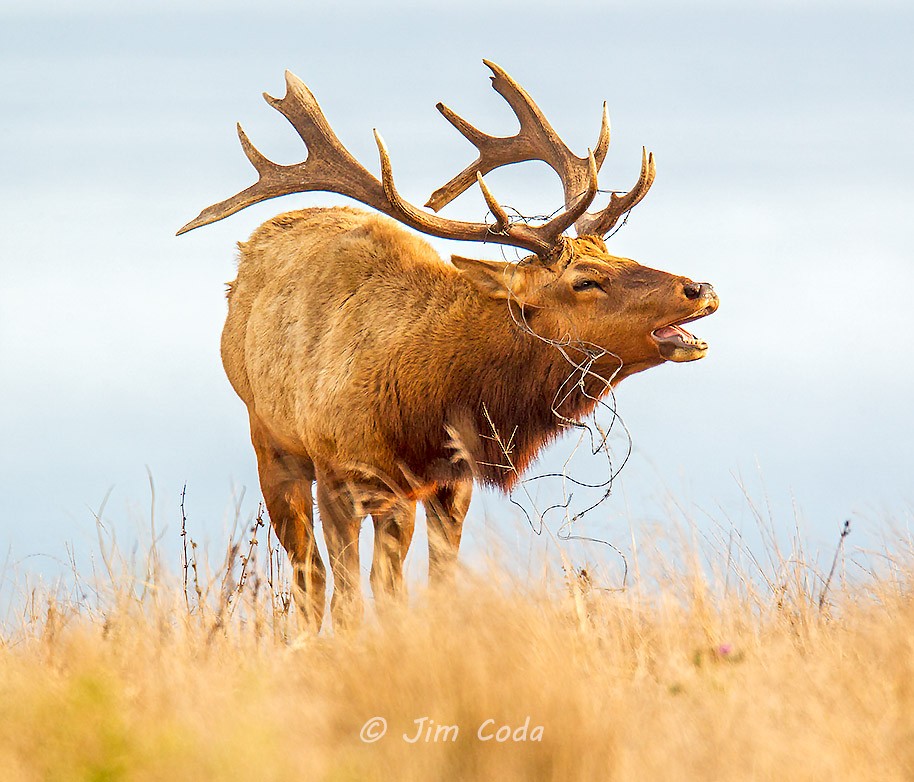 I'm riding along with Press and Point Reyes National Seashore (PRNS) outreach coordinator Melanie Gunn to find tule elk in the pastoral zone, a large slice of the seashore where, unique to Point Reyes, ranches established 150 years ago continue to operate per agreement with the park.

The elk that live at Point Reyes were more legend than reality to me until one day last year when a friend posted a picture on social media. Look, she said, elk are everywhere. As soon as I got the chance, I cycled down the picturesque peninsula, mainly to visit the annual elephant seal colony. But I kept an eye peeled for herds of wild tule elk.

I saw no elk. Instead, I saw cows, lots of cows, black and white Holsteins backgrounded by the glimmering blue Pacific Ocean like a commercial for happy California cows. So I took pictures of cows.

According to Point Reyes ranchers, there are plenty of elk here—an "elk invasion," some call it, claiming that elk are eating grass meant for their cows and cattle, and threatening their organic certification. As PRNS prepares to extend ranch leases at the direction of former secretary of the interior Ken Salazar after he allowed the 40-year lease of an oyster farm in Drake's Bay to expire, a free-ranging herd of tule elk has become a sticking point in the park's attempts to develop a "ranch comprehensive management plan," the park's first-ever master plan for ranching.

"We're sort of on the front end of the process at this point," says Gunn.

Although the park accepted scoping comments from April to June last year (a call for public feedback on what the plan should include), wildlife advocates say they've been largely shut out of the discussion, and that removing the elk to appease ranchers would run counter to the mission of the National Park Service.

At D Ranch, we meet up with Tim Bernot, a park wildlife biotechnician. Bernot has been counting elk all morning for the annual census. It's not that easy. "They still surprise me every day," says Bernot. "They're not as dumb as they look, sometimes. They're pretty interesting animals."

Gesturing to a ridge that looks half a mile away, Press says, "You see those three elk bedded down there? They're all on areas that are not permitted for grazing currently, so that's kind of where we want them to be."

Where? In a few seconds I count 60 dairy cows, but it seems like the rangers have eyes like raptors where elk are concerned. Then I see them, beige dots scattered in the brush. An older one, Bernot says, has separated from the rest because she's on her way out. One of the original elk from a herd relocated in 1999, she'll be dead before the end of the year.

But I came here to see an elk invasion.

At C Ranch, we find a bachelor group, just where they were supposed to be—well, not supposed to be, but expected to be. Outside of the rut, most male elk hang out together in noncompetitive groups.

"Ten elk today isn't so bad, but when you have 60 animals over there as well," Press gestures to D Ranch, "and those other guys on that far ridge, you've got close to a hundred animals." The argument that ranchers are making, says Press, is that there's only so much grass to go around. "Even though they spend a fair amount of time over in those nonleased areas, there's nothing keeping them from coming and going."

Though they're mostly laying around, they are striking. The core group of four prime bulls have massive antlers, with downward-curving tips. Antlers are shed every year, but grow back bigger than ever, requiring calcium, phosphate and selenium from the environment in the process.

Quite unlike cattle, the elk are alert and aware of our presence at a distance of several hundred yards. The word majestic is no cliché for this sight, which is unfamiliar in the California I've known all my life, and unmistakably wild—almost exotic.

They are anything but exotic.