HERDS OF THE PAST

In 2007, the park set its sights on hundreds of axis and fallow deer then roaming the seashore. Exotic in the biological sense, these non-native species hailed from India and the Near East. In the 1940s and 1950s, before PRNS was established, a few dozen were introduced for sport-hunting enthusiasts. They'd become invasive, the park said, competing with native mule deer and tule elk.

When a controversial eradication plan turned from contraception to professional riflemen—although park rangers had culled deer in the past—Sen. Dianne Feinstein and other lawmakers were besieged by outraged constituents and rushed to intervene. Too late for the last luckless axis deer, but the park has a remnant, declining population of about 60 fallow deer.

Tule elk are endemic to California, meaning that their historic range was confined to this state. One of four surviving subspecies in North America—two in the east were rubbed out—tule elk are slightly smaller than their relatives. But before 1800, their numbers were huge.

On the coastal prairie from Santa Barbara to Sonoma County, and throughout the Central Valley, an estimated half-million tule elk were the dominant grazers in California. Over a hundred years of hunting, habitat loss and cattle ranching brought them to the brink of extinction.

Because elk are bigger than deer, gather in herds and live in open grassland, they were targeted by Californios for hides and tallow during the Spanish period.

"They would come out on big hunts," says Press, "where they'd take down 40 or 50 at a time." Later, teams of hunters serving Gold Rush–era meat markets "finished up," in the words of one, all the elk from wide swaths of the state.

Tule elk were thought extinct by 1874, when a wealthy rancher spared a few survivors he discovered while draining one of the Central Valley's once-vast marshlands. All of the approximately 4,000 tule elk in 22 herds on public and private land are descended from those.

The establishment of a herd at Point Reyes was no lark. "It was a real long-term goal at the time," Press explains. "It was very well thought out."

In 1971, in response to decimating hunts when the main herd in Owens Valley still numbered only in the hundreds, State Sen. Peter Behr sponsored legislation that banned hunting of tule elk until the population reached 2,000. Congress passed a companion bill in 1976 that instructed the secretary of the interior to work with the state to identify potential elk habitat on federal lands, including Point Reyes National Seashore. 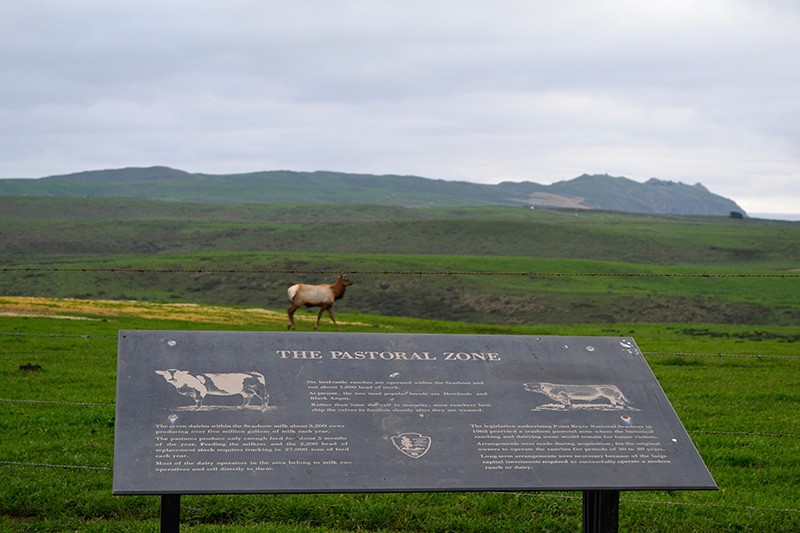 Ten elk were placed in a 2,600-acre preserve at Tomales Point in 1978. By 1998, the population had expanded, and the park prepared a management plan that was mixed on the carrying capacity of the narrow reserve, but recommended relocation of some animals to the Limantour area of the park's wilderness. The environmental assessment for the plan anticipated "no significant impact."

Within weeks, two females left the wilderness and found their way to the pastoral zone across Drakes Bay. One of those, nicknamed "White" for her radio collar, is still a herd matriarch. They returned for the rut, but came back with a calf in tow. According to the park's 2014 census, this splinter herd now numbers 92, while 120 remain mostly in Limantour. The elk total 498 in all.

Elk have no natural predators in the area. Mountain lions prefer deer, coyotes mostly don't dare and California's only wolf chose to raise his family in Oregon.

Over the decade leading up to the ranch management plan process, ranch and dairy operators have increasingly voiced their frustration with the free-ranging herd. Pointing to the 1998 plan, they say the park is obligated to manage the elk should they impact neighboring properties.

How the park responds to their concerns may depend on how one defines a neighbor.

The ranches at Point Reyes have their origins in chaotic litigation that followed the dissolution of Mexican land grants. When the dust settled, the only folks left standing were the lawyers. The partners of San Francisco law firm Shafter, Shafter, Park & Heydenfeldt diced the peninsula into ranches (later named A through Z), leased them back to tenant farmers and founded a name-brand dairy empire.

The properties were sold to ranchers between 1919 and 1939. A generation later, a historic deal was struck between ranchers, environmentalists and the National Park Service to establish Point Reyes National Seashore, in 1962.

As funds became available, the park purchased the ranches at market rate and offered the sellers a reservation of use and occupancy of not more than 25 years, or until the death of the owner or spouse.

Today, the North Bay's renewed food culture celebrates the products of Point Reyes farms, from gourmet cheese to grass-fed beef. But the long-term leases have termed out.

"We made it clear from day one," Gunn says. "It's not a question of if there's going to be ranching, but how we do it."

In an attempt to build consensus around the Ranch CMP and the tule elk issue, PRNS invited the community to a series of workshops.