It was a packed house at the Dance Palace Community Center in Point Reyes Station on Nov. 21, 2014. Beaming under their iconic wide-brimmed hats, park employees and officials ringed the room while a team of professional facilitators set the stage. A convivial buzz settled when David Press, who grew up in Inverness, began a PowerPoint overview of the tule elk situation.

After explaining that habitat enhancement efforts had concentrated animals in an area outside of ranch boundaries from July 2013 to July 2014, Press detailed the pros and cons of the park's available options for managing tule elk in the pastoral zones. Then Press asked the crowd to "put your flat hats on," and they broke up into groups to discuss ways that the PRNS might best resolve the issue.

At first, you might have split the crowd into West Marin stereotypes—farmers wearing ag-branded ball caps, bearded environmentalists in L.L. Bean parkas. But upon prompting from the facilitator, people left their cliques and crossed the room to meet with the other side—most everyone knows who's who.

Chairs closed. People leaned forward into heated discussion. Markers were scrawled on flip charts and pages went flying as if blown by the wind to the walls of the Dance Palace. The community's impassioned, but civil debate looked like a success.

After the tightly scheduled sessions, group spokespersons presented their findings. Many declared that the elk must go, and there was some support for trophy hunting. But mostly they found that they didn't agree: "Our group was fairly split" and "I want to make it clear, there was no agreement among our group" were typical sentiments.

At least everybody had his say. But as one spokesman in camouflage hunting pants summed up what he said was his group's position, a bearded gentleman opposite him seemed to glare into the middle distance, eyes narrowed, tight-lipped. Perhaps I wasn't getting the whole picture.

"It seems the workshops were a failure, at least to the extent the park was hoping to find consensus on any topics," Jim Coda complained in a follow-up letter to park superintendent Cicily Muldoon. Coda, a wildlife photographer who attended both meetings, says that the workshop started from the assumption that elk must be removed from the pastoral zone without discussion about why cattle should have precedence over them.

In his view, there's something missing from the debate: national parks have a different purpose than ranching. "They are special lands that are set aside for the preservation of natural resources and the scenic beauty there," Coda says.

Coda used to enjoy hunting, until he took up photography and bought a big telephoto lens. "And I'm glad I did that," he says. "I could never hunt today. Except with a camera."

He hadn't been out to Point Reyes for years, but after returning from Yellowstone National Park, he gave it a try. He was surprised. "I saw bobcats and coyotes pretty regularly, and I thought, this is pretty cool—this is my Yellowstone at home." 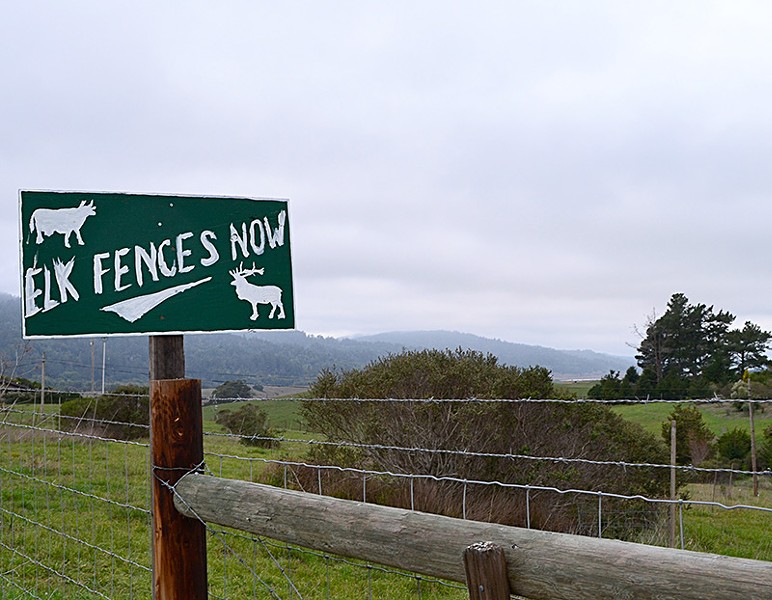 The problems that ranchers are having with fences, says Coda, are more the fault of the fence than the elk. He points to guidelines the Bureau of Land Management uses, both to reduce injury and death caused to elk and deer by "scissoring" when their legs catch improperly spaced wires, and to reduce damage to fencing. "Those wildlife-friendly fences are supposed to be adequate for cattle," says Coda. "That's the whole point!"

None of the 21 fences that Coda measured at PRNS met Land Management standards. "I just find that it's astounding that a national park would take such a position on wildlife-friendly fencing," he says.

The last thing that the park needs, says Tule Elk Foundation's Julie Phillips, is another eight-foot fence like the one at Tomales Point. Phillips, a tule elk biologist, says free-ranging elk are not an aberration, but the "natural next step" in keeping with the park's mission to restore natural processes.

"The vision of allowing tule elk to help in the restoration of California's native grasslands, coastal prairie, oak woodlands and more is gaining momentum," Phillips says in an email. Instead of ramping up farming activities, she suggests, "tule elk should take priority over non-native domestic livestock especially within federally owned national lands."

Nothing against organic farming, says West Marin resident Jeff Miller, a conservation advocate for the Center for Biological Diversity (CDB). "Ranchers can make a living, and make a good living," Miller says, "and continue to provide organic food, without demanding that the public get rid of the wildlife. I don't see how any business that is sustainable and touts itself as being good for the environment would want to remove the native wildlife."

Based in Arizona, the CBD encouraged its members to comment on the ranch management plan. While the environmental group touted the results of its web campaign, others said that "outsiders" had butted in on a local matter. But there's nothing locals-only about a national park, according to Miller.

"The ranchers like to frame the issue as, 'the elk are somehow trespassing on the pastoral zone,' when in fact the elk are supposed to be there," Miller says. "The proposal to fence these elk in and have them as an exhibit is contrary to what the national park is supposed to be about."

Furthermore, Miller alleges that ranchers are stocking more animals than they are allowed to, while paying below-market rates for the land ($7 per animal unit month; dairies have a different arrangement), and then blaming the elk for overgrazing during the drought. "The elk are being scapegoated for those conditions," says Miller.

"Having been around the West, I don't think there's a shortage of cattle operations," says Karen Klitz, a board member of the Western Watersheds Project. "You can go many places and see those." In contrast, says Klitz, the public does have an interest in "a real national park with native animals." She says that a park docent recently affirmed to her that the public is excited about the wildlife. "But nobody asks to see the cows."

Some advocates for free-ranging elk envision a fenceless coastal prairie where visitors could experience a landscape that existed for more than 10,000 years before European settlement.

But most are resigned to compromise—or hopeful for it. Edward Loosli, president of the Wildlife Trust, based in Walnut Creek, which is now focusing on Point Reyes wildlife and habitat restoration, and also operates in Kenya, offers this: "The Maasai rancher pastoralists in Kenya, East Africa, have been co-existing with wildlife for many hundreds of years. If they can do it, so can we."