No such compromise is likely, says Albert Straus, president of Straus Family Creamery and a leader in organic dairying. "That's not sustainable. It's not going to work either short-term or long-term."

Straus does not lease land in Point Reyes, and his own herd is across Tomales Bay in Marshall. But he recently contracted with the Mendoza dairy on B Ranch, and is sympathetic to their concerns.

"As a stakeholder in the park," says Straus, "I'm going to all the hearings, put in public comments, and am meeting with public officials to advocate for organic farming and the sustainability of farming in our community."

Summarizing the position of ranchers in the pastoral zone, Straus says that elk were never meant to be there. "They're not supposed to be on that land, that's the basic thing—there's a management plan that had them in the wildlife area, not the pastoral zone."

Straus blames the park for neglecting the elk. "Last winter, they had a third of the elk die in the wilderness areas because they starved to death or didn't have enough water. In my mind, that's not a sustainable management system."

Straus supports the park's proposed long-term lease plan, saying it will improve ranchers' business relationships and ability to get loans from banks. "I think there's a huge opportunity for the park to work with the farms, to make them a model for how it can work," he says.

Back on D Ranch, David Press shows me a livestock pond that the park is filling from 3,000 feet of pipe connected to the Drakes Beach water system, in an effort to provide better habitat for the elk, away from nearby dairies.

When elk graze in a lush pasture that's adjacent to one dairy's milking barn, Bernot and other rangers "haze" them away. A little arm-waving goes a long way.

On Drakes Beach Road, Press points out elk crossings they installed after identifying key corridors of movement within the park. Lower than the fence and reinforced with two-by-sixes, the crossings minimize fence damage.

Some elk are fitted with GPS collars to monitor the herd's range. Information on the elks' movement is collected every three hours and beamed to a satellite that downloads it to a server that spits an email to Press' cell phone.

When I call Press at his office later and ask about White, he says, "Hang on a second, I'll pull up her file." So far, I'm seeing more wildlife micromanagement than mismanagement. 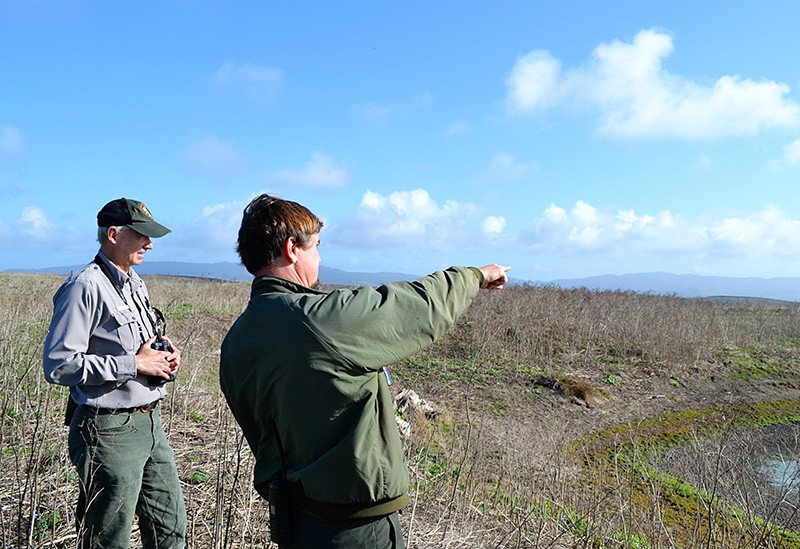 The park is exploring several options for removing the free-ranging herd from the pastoral zone, should they find a need to do so.

Simply putting them somewhere else in California is not simple at all. The tule elk at Point Reyes are the only herd known to carry Johne's disease ("yo-nees"), a gastrointestinal bug that affects ruminants. Even this has become politicized: ranchers smear the elk for carrying "the dreaded Johne's disease," while Miller says, "The elk are not a reservoir for the disease; it's almost guaranteed the elk got it from the cattle."

Ultimately, any movement of elk outside of PRNS is up to the state of California, says state elk and antelope coordinator Joe Hobbs: "The state is going to take a cautious approach, that they get a clean bill of health, wherever they're going."

Meanwhile, park staff are out there collecting elk feces to send to a lab at the University of Wisconsin.

Capturing and providing contraception to the elk would be labor-intensive, may induce undesirable behavioral changes and would have little effect for five to 10 years.

The construction of an elk-proof fence across the Phillip Burton Wilderness may be the most popular option. One challenge is that a wide buffer zone would have to be slashed through the wilderness in order to construct and maintain such a fence.

Another problem is that it wouldn't be elk-proof.

"We brought some of our Park Service ungulate-management specialists from Colorado to consult with us on this matter," says Press. They had concerns. Elk will follow fence lines until they can get around, and nothing would stop them at the eastern end of the fence. Also, elk can swim.

Press has some experience with fencing fiascos. Once, he attempted to build a seal-proof fence to keep elephant seals from an area at Drakes Beach. They made short work of it. "It was just a whole bunch of splintered boards," Press says ruefully.

Another option: shoot the elk. The positive spin on having park staff or contractors do the killing is that elk meat could be distributed to homeless shelters or the California Condor Recovery Program.

A state program for private landholders would provide another model. After developing a five-year plan to improve wildlife habitat in cooperation with the state, landholders are permitted to sell elk hunting tags worth up to $15,000.

"It's a nonstarter," Miller says. "First off, the park service would never go for it. This is a park with millions of visitors, hikers, birders—it's a pipe dream for the ranchers." But thus far, it's on the table.

"What I've been trying to communicate from day one with this issue," Press says, "is that there are really no easy solutions."

That's surely an understatement. But even identifying the problem is a tough call, too.

Is there such a thing as an "unauthorized elk herd," as characterized in a scoping letter submitted by the Point Reyes Seashore Ranchers Association?

The argument is that the 1998 tule elk management plan designated an 18,000-acre elk range within a defined boundary. The plan does include a map with a shaded area marked "proposed tule elk range."

"We didn't anticipate that there would be elk in the pastoral area," says Gunn, "but I wouldn't call them unauthorized. It's a wild population, and migration occurs." Where it holds the park responsible for mitigating impacts on neighbors, the plan's language explicitly refers to landowners outside the seashore.

"There's no question that they are consuming forage on these pastures," Press says of the pastoral zone elk. "What we don't know is whether there is a level of competition between cattle and elk."

"As a scientist, I'm interested in evidence," says Hall Cushman, professor of biology at Sonoma State University. Cushman—who is at pains to emphasize he does not advocate for one position or another, but would like to play a positive role in the discussion—has been studying a tule elk exclosure experiment at Tomales Point since 2002, and has studied the impact of elk across the West.

"There really isn't a lot of strong evidence that elk are negatively affecting cattle," Cushman says. "It doesn't mean that it's not happening," he cautions, "but I'm not aware of studies that propose such data," he says about Point Reyes in particular.

Arguing that their expertise should count for more than that of National Park Service range ecologists, ranchers have also requested that park managers remove "arbitrary" limits on how many animals they may stock. By packing more animals on pasture, the ranchers association letter goes on to suggest, they will improve the ecosystem.

According to the park's estimate, Point Reyes hosts a fluctuating population of 5,000 to 6,000 beef and dairy animals, depending on the season. "We simply don't have the capacity to go out there and count cows," says Gunn.

They do count elk. There are 92 in the D Ranch group, and a few dozen more from the Limantour herd wander into ranches to the north.

A Holstein weighs around 1,500 pounds; Tule elk weigh from 325 to 700 pounds, and are considered the foraging equivalent of about half a cow. In that sense, then, there may be 100 times more cows than cow-equivalent elk using the pastoral zone—albeit in some areas more than others.

Organic certification requires that cows get 30 percent of their forage from pasture for a minimum of 120 days. In February of 2014, responding to the drought emergency, the USDA authorized a temporary variance in organic standards allowing certified operators to relax grazing requirements.

Wildlife advocates say there is a different organic standard that the park must consider: the Organic Act of 1916, which established the national park system.

"Based on the Organic Act and the park's enabling statute," Coda states in his scoping letter, "the Park Service's overarching responsibility is to preserve and protect the natural resources of the park. There is no statutory right to ranching in the park."

Coda's perspective is interesting, not just because he likes to take pictures of wildlife—that's his retirement career—but because of his earlier gigs at the Department of the Interior, the Navy and as an assistant U.S. attorney representing federal agencies in land-management issues. Now he's just speaking his mind as a private citizen. 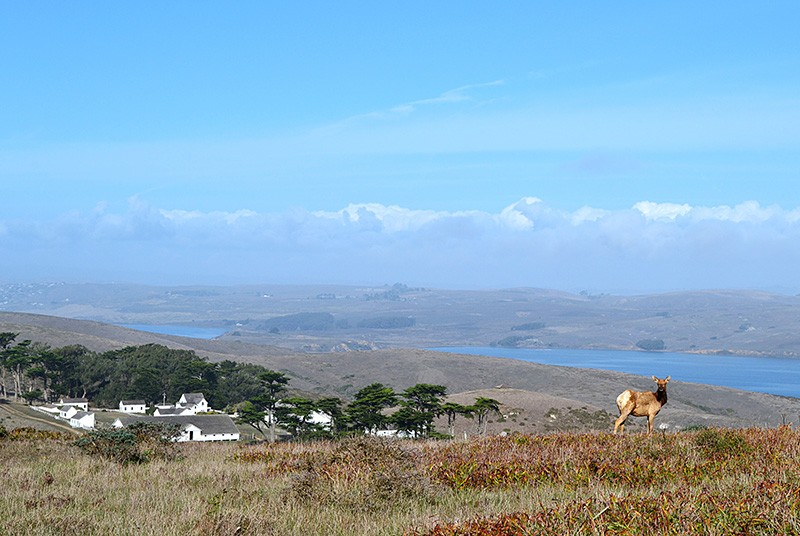 The Center for Biological Diversity, however, has a history of suing PRNS, and boasts a long scroll of lawyers on its website. And the Western Watersheds Project regularly mounts a new trophy of litigation—wolf killing, grizzly-culling schemes stopped in their tracks—on theirs.

At this stage, nobody wants to discuss possible actions. "For now, we're letting them know we exist," says Klitz.

Meanwhile, local lawmakers who have intervened on the side of ranchers include Feinstein, erstwhile champion of exotic deer. But are ranchers willing to bet the farm that Democratic politicians won't waver if their nature-loving Bay Area supporters hear the crack of rifles once again around the hills of the seashore?

If the environmental assessment does not find a need to pursue an environmental impact statement, the park will open another comment period, and a decision is expected in late 2015.

"We wouldn't start on this track if we anticipated a finding of significant impact," says Gunn.

Finally, to see what elk look like behind a fence, I drive up to the Tule Elk Reserve. What first captures my attention is not the elk, but the fence. On the pastoral side, the grass is brilliant green, but grazed to the ground. On the elk side, the landscape abruptly shifts to a random patchwork of grass and scrub. Asked if one is better than the other, Cushman says no. "They are just different situations."

In silhouette against ocean and sky, a bull elk nudges a group of cows onward, while a second bull attempts to sidle up. Two more visitors stop their cars to watch the scene.

On a bluff nearby, a peaceful group rests in the grass, looking out over Pierce Point Ranch. This historical resource is exactly that—history. If brightly painted and picturesque, it's also permanently shuttered, and no one farms there. This is the domain of 286 elk.

When I try to tiptoe close to take a picture, the cows stand up, more wearily than warily. These elk know how this goes. They only have to wait for the humans to leave.