Wine Tasting Room of the Week 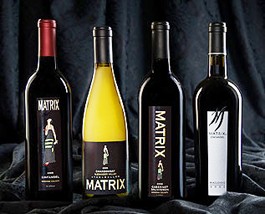 In the midst of one of the shortest, most hectic harvests in recent years, brix are aiming for 30, truckloads of grapes are crisscrossing the state and Waukesha jockeys are racing from tank to tank. But Matrix, perched between a parking lot and a lonely, plowed-up hillside, was a quiet place on a recent Sunday afternoon. That's because the crush is happening over at Mazzocco, from which Matrix is a spinoff, both wineries owned by Ken Wilson.

The last time I visited, this was Rabbit Ridge. An early critter-label adopter, the winery was a popular local producer of nicely priced Zinfandel and other varietals that grew so rapidly it built a series of code-violating wine warrens worthy of Watership Down—or so declared the county of Sonoma. The Rabbit hopped on down to Paso Robles.

Much of the place is in transition, and so is the label. Instead of Mazzocco's wraithlike, floating "M," new labels feature a tongue-in-cheek image of an elegant flapper, glass in hand, tragically stumbling her last step, struck through the heart by an arrow. Motto? "Wines to die for." Well, that's something to live up to, anyway. The interior is pea-soup green and the soundtrack a jangly radio, but at least one tasting-room hostess sported a black dress in the spirit of the new, gothic motif, and the bar stools make it clear that guests are invited to relax and enjoy the tasting for a while.

The 2006 Stuhmuller Chardonnay Reserve ($36) was a wine to pine for. I found it had an unusual, woodsy scent, followed by a sweet and easy-to-like body. The 2005 Russian River Valley Pinot Noir ($35) also seemingly hailed from a forest—now redwood—overgrown with lush, briary fruit. The 2005 Sonoma County Zinfandel ($18) was a simply enjoyable sipper of the vanilla-raspberry variety; the 2006 Dry Creek Zinfandel ($45) added all the more cocoa and orange-peel complexity that an extra $27 can buy, wrapping the tongue in a long, sweet finish. There's a Cab in there somewhere, quite likable, but it seems the winemaker takes his Syrah more seriously; the 2005 Sonoma Coast Syrah ($32) and the glass-staining 2004 Grove Vineyard Syrah ($36) are lush and plum-skin chewy.

Wines to die for? They are reasonably priced and tasty, and I would have liked to cozy up and get tragic with a few bottles, had I not been already killed dead in the pocketbook.