Solving 'Clue,' one song at a time 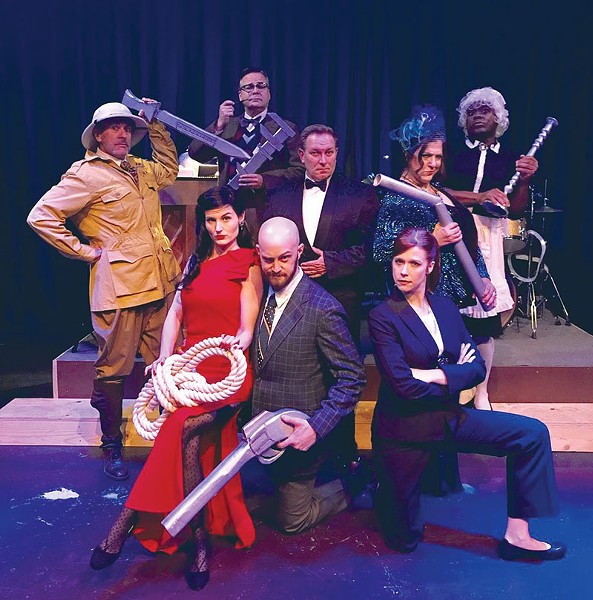 In Lucky Penny Productions' slight but entertaining Clue: The Musical, audiences are encouraged to play along, competing to see who can guess which onstage character committed the murder, in which room and with which weapon.

Based on the beloved board game (not the 1985 movie), Clue is packed with effective (but fairly unmemorable) tunes, with inspired choreography by Staci Arriaga, and a string of goofy gags. The plot (forgive me for using that word, Mr. Webster) is exactly what one might expect. There is a different ending with every performance, depending on the choices of three audience volunteers, who randomly choose cards depicting the victim, place and weapon. Those cards are then placed in an envelope hanging from the bandstand, where live musicians watch the action and sometimes become involved in it.

The "story" (sorry again, Mr. Webster!) is simple. At the home of the soon-to-be-dead Mr. Boddy (Barry Martin)—who acts as the narrator, before and after his murder—six colorful suspects have gathered: the conniving Colonel Mustard, the oft-married Mrs. Peacock, the grammar-obsessed Professor Plum, the social-climbing Miss Scarlett, the larcenous Mr. Green and the flat-out hilarious Mrs. White. They all have good reason to want Mr. Boddy dead, and when it finally happens, just before the intermission, it's then up to the audience, with the "help" of a bizarro second-act detective (Heather Buck).

The dialogue is delightfully silly, packed with puns and bawdier than one might anticipate from a show inspired by a family board game.

This kind of theatrical lark is best played fast and loose, and under the bouncy direction of Taylor Bartolucci, the talented cast certainly handles the "loose" part of that equation. The pace, however, was a bit lackadaisical on opening night, stretching the thin, pleasantly pointless material to just over two hours (a time frame better suited to a Monopoly: The Musical).

Still, there is a pleasingly nostalgic thrill to seeing these characters brought to life. That is especially apt of the true (and cartoonishly oversized) stars of the show: the Wrench, the Lead Pipe, the Dagger, the Candlestick, the Rope and the Revolver. On opening night, when those weapons appeared, some of the audience actually cheered.