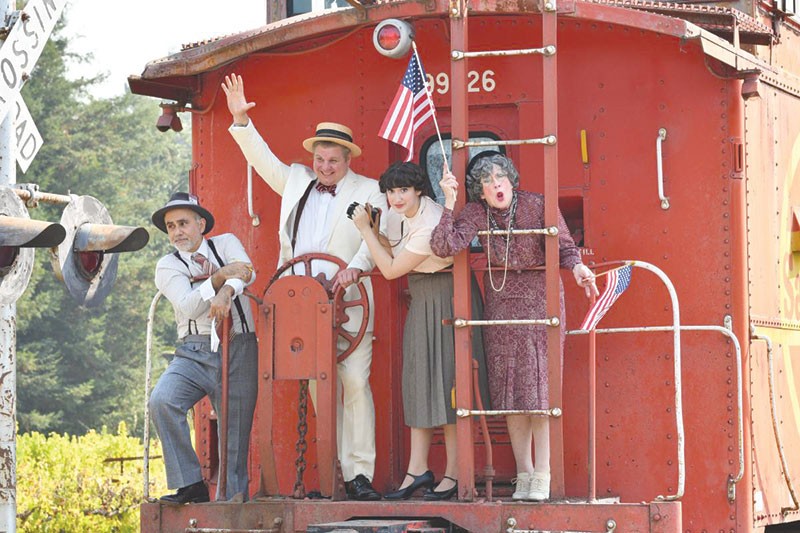 It can't happen here. When Sinclair Lewis chose that phrase for the title of his satirical 1935 novel about a fascist American dictatorship taking control and essentially eradicating democracy, the title meant several things.

It was comforting, as we watched Hitler and others take power in Europe, to believe that our Constitution's checks and balances would prohibit such tyrants from taking control in America. The title was also ironic, suggesting that, of course, it can happen here, a reminder that history is full of freedoms falling to self-serving despots.

Finally, it was meant as a plea—it cannot, must not, happen here—a call to resist the lure of political leaders offering safety and posterity in exchange for the sacrifice of a few "dangerous" freedoms.

The Santa Rosa Junior College is about to open a two-weekend run of Tony Taccone and Bennett Cohen's 2016 adaptation of Lewis' book. Like the novel, the play follows the presidency of the fear-mongering populist Berzelius "Buzz" Windrip (Neil Thollander), and attempts by liberal journalist Doremus Jessup (Khalid Shayota) to rally a resistance effort against him, as America rapidly falls into deeper and deeper levels of despair and fear.

Did I mention it's a comedy?

"The play is highly entertaining and often very, very funny," says Leslie McCauley, director of the production. In other words, there are laughs in It Can't Happen Here.

But they come with a sting. Especially now under President Trump.

"The important thing to remember about this play is that it is not about a specific personality," says McCauley. "It simply asks the question, 'Why does America dally in fascism every 50 years or so? What is inherent in the American DNA that causes that? How do we protect this fragile thing called democracy? And what happens to a family when they are politically divided?'"

One of McCauley's directorial touches is the addition of singer-songwriter Teresa Tudury as a kind of musical narrator to the action.

"This is a critical moment in our history," McCauley says. "By comparing our contemporary political situation to a novel written in 1935, when fascism was on the rise worldwide, we can't help but be struck by how prescient it was. Every day I read the headlines, and they parallel pretty exactly what happens in the play. I don't think we've done a play here that feels quite as important as this one does, right now."