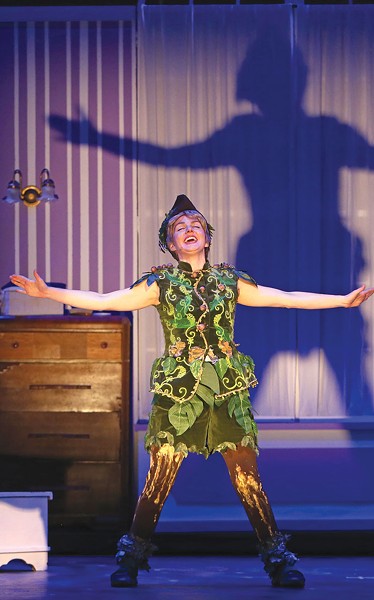 Peter Pan has been seen onstage in one form or another for well over a hundred years.

The J. M. Barrie classic survived being Disney-fied and even Christopher Walken–ized in a disastrous live television spectacle. The most popular adaptation is the 1954 musical starring Mary Martin. It's that version that takes flight in a well-mounted production running at the Spreckels Performing Arts Center through May 20.

Peter Pan (a winsome Sarah Wintermeyer) has lost his shadow while eavesdropping on story time at the Darling household. While retrieving it late one night, he awakens eldest child Wendy Darling (Lucy London), and after a quick flight demonstration, Peter convinces Wendy and her brothers to join him in Neverland. They'll soon cross paths with some warriors and the dastardly Captain Hook (David Yen) and his scurvy pirate crew.

Director Sheri Lee Miller and her team get almost everything right here, from casting to costumes and sets, from choreography to musical direction. Yen must be on a low-fiber diet, as he doesn't really chew up the scenery as much as one would expect with such a role. Still terrifically entertaining, his decision to go small with some things puts the bits in danger of being lost on the large Spreckels stage.

Nice supporting work is done by Craig Bainbridge as Hook's right-hand man, Smee, Morgan Harrington as Mrs. Darling and the entire cast as Wendy's siblings, various warriors, pirates and Lost Boys. Honorable mention goes to the backstage "flight crew" and to Andy Templeton who spends the show costumed as either Nana the dog or a tick-tocking crocodile, but manages to get some of the biggest audience reactions.

Miller handles the problematic parts of Barrie's script—its depiction of Native Americans—by transmogrifying them from an "Indian" tribe to nonspecific "warriors" and costuming them in a patchwork of styles and designs. It helps, but some dialogue ("Let's smoke a peace pipe!") and lyrics are still a bit cringe-worthy. Nevertheless, Peter Pan makes for a great evening of family entertainment.